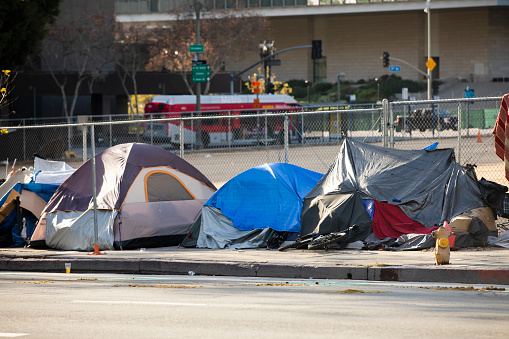 Homelessness, … a tragedy & travesty of our societies, a societal & governmental issue which, although rampant throughout our societies … is curable. The issue of homelessness is continuous and ever unabated, yet it is an issue which with proper attention & action by governmental & societal faculties may finally be resolved and stricken from our cities, our states, and hopefully our nation!

In the United States we incessantly see the homeless, along the roadsides, moving to & fro, without destination, … in search of one. At intersections & crossroads we see their signs erect pleading for help, for care, … for someone, anyone to aid their existence. These pleadings, however go largely unnoticed, unresolved as we shield our eyes from the horror & plight of the derelict & disparaged, as we speed away such that our conscious be not bothered to feel saddened & ashamed by the conditions which live on in our society for our fellows in humanity, treated as rubbish in this proud nation uncared for, unattended, … unimportant.

The Issue of homelessness takes root in many facets of our societies & government. It is common here to see the homeless all around. However, it may not be commonly known, that the homeless cost our Uncle Sam annually, more than would be to rid them of their plight, & house them with the aid & support, they plead for upon our streets. For all the expenses which the homeless beget in the form of services such as, hospitalizations, welfare services, & the administration of “justice”, amongst other costs, take a larger toll upon the checkbook of the American taxpayer, than if this problem, were to be resolved by federal & state governments, a solution which requires approximately 20 billion dollars yearly to enact; a cost quite tiny in comparison to the annual budget of the military which grows evermore, well over 700 billion dollars. With not but our own dedication to take action, it is hard to see why such has not yet been applied to our societies, unless there be dubious intent & action in the hands of our government.

The homeless we encounter, their numbers bolstered ever more extensively due to our current circumstances, … we may not wish to acknowledge. In the words of former homeless Austinite, Lars Eighner, “Almost everything I have now has already been cast out at least once, proving that what I own is valueless to someone”. This message is quite profound, for while the homeless may view things which they find, to have been valueless & cast out by their previous owners, so do many in our society view, & in the action of our governments being Texan or otherwise expressly show that they see the homeless as without value, as lumps of flesh & bones, inhuman, to be cast away, off of whatever conscious our governments still hold. This is an understanding, which has been exacted throughout the state of Texas via HB 1925 which took effect in September of 2021, “making it a criminal offense … for anyone to sit, lie down, or camp in public areas & prohibiting solicitation of money or other things of value at specific hours & locations.”

However, in lieu of positive government action or attention, we can bring a greater effort to ending homelessness & the misery which our society’s desperate & despondent hold. We can help by creating & supporting more resources & aid for the homeless, such as safe & supervised shelters, soup kitchens or hunger relief programs, as well as through protest efforts to bring about change, at the governmental level, as an annual investment of around 20 billion dollars would. The circumstances adopted by our societies & governments, to be unseeing, unhearing, & unthinking of the homeless, of Bill, Ann, & Jodey who live in the tents along our streets, compel this issue, this miserable & horrendous way of life to be ceaseless!

Homelessness is doubtlessly a problem, though a problem with a clear, applicable solution, which our governments & societies must move to enact! It is our moral obligation to our fellow man, woman, & child, to work together to finally end a seemingly endless horror!